The German Society of Pennsylvania, founded in 1764, is the oldest German-American charitable and cultural organization. “At that time the population of Pennsylvania was estimated by Benjamin Franklin to be 160,000, of whom he supposed one-third to be German.
The main purpose of the Society as a charitable organization was stated to be the investigation and amelioration of conditions among recent and future German immigrants. It became the chief instrumentality in bringing about more humane conditions on shipboard and on the shore for the thousands of ‘redemptioners’ who left their homeland after the pillaging of the Palatinate by the French, and who bound themselves to years of labor to pay for their passage money.” (The 232rd Anniversary Celebration brochure of the German Society of Pennsylvania: 1996)

For more than two centuries, the Society has continued to help thousands in distress, giving material aid, advice, legal counsel, and medical care.

Central to the activities of the German Society of Pennsylvania was the establishment in 1817 of a library that would satisfy the thirst for German language and culture. The Joesph Horner Memorial Library houses over 70,000 volumes. Over three-quarters of the holdings are in German, making it one of the largest collections of books in German in the United States.

“Among the distinguished persons who have honored the German Society with their work as officers or members of the Board of Directors were Christopher Ludwig (famous as the first ginger-bread baker in Philadelphia, and also the ‘Baker General’ of the American Army’ ), Peter Muhlenberg, and Frederick August Muhlenberg. Major General Baron von Steuben and Dr. Bodo Otto, Senior Surgeon of the Continental Army, were members in their day, as was John Wanamaker, the father of the modern department store.” (The 232rd Anniversary Celebration brochure of the German Society of Pennsylvania: 1996)

“Friedrich Ludwig Jahn founded the first Turnverein in Germany in 1811. In 1848, German immigrants brought the Turnverein to Cincinnati. As the American Turnerbund, this popular gymnastic/cultural association soon spread to all the major cities in the country. By the eve of World War I it averaged between 35,000 and 40,000 members.” “The Turnvereine were dedicated to the principled of ‘a sound mind in a sound body’, stressing gymnastics and other sports activities, as well as encouraging singing and offering art and language classes.” 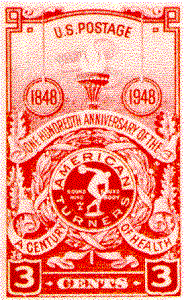 The Turnvereine earned an outstanding reputation for patriotism during the Civil War, with some lodges enlisting half or more of their membership in the Union army. As a result the Turnerbund became the main spokesman for German America for a time, and it remained a central organization.” (“Institute Acquires German-American Archives”, New Dimensions: The Balch Institute for Ethnic Studies, Spring 1992, vol. 14, no.1, 5)

“Philadelphia played a prominent role in the early years of the Turner movement in the United States. The first society, the Philadelphia Turngemeinde, was organized in 1849. By 1905 there were seven societies with a total membership of about 2200, almost half of whom were members of the Philadelphia Turngemeinde. In 1925 there were 2800 Turners in the city, but 2400 were members of the Turngemeinde, with the rest spread among the four other societies. By 1935 there remained only the Turngemeinde, with one thousand members, and the Germania Turnverein von Roxborough, with thirty members. Since the 1960s only the Roxborough Turners have functioned as an active society.” (Eric L. Pumroy and Katja Ramplemann, Research Guide to the Turner Movement in the United States, Greenwood Press, 223 – 224)

Philadelphia: Roxoborough Turners. “Organized in 1873 as the Unabhängige Turner von Roxborough, an off-shoot of the Turnverein von Manayunk, founded in 1854; acquired hall in 1878; joined the national Turnerbund in 1879; merged with the Germania Sängerbund von Manayunk to form the Germania Turnverein von Roxborough und Manayunk in 1886; sponsored women’s section, singing group, and gymnastics classes by early 1890s; acquired building on Leverington Avenue to serve as hall in 1890s; had membership of about one hundred from 1890s through 1920s, which dropped to thirty by 1935; changed name unofficially to Roxborough Turners in late 1930s, and officially in 1947; revived following World War II, with 381 members in 1950 and more than two hundred in 1970; still active as social and athletic organization.” (Eric L. Pumroy and Katja Ramplemann, Research Guide to the Turner Movement in the United States, Greenwood Press, 226)